Dr. Michael Byron, President and Chief Executive Officer said, “Goldcrest is very similar to Colomac Main except it has been drilled significantly less and has a shorter strike length of 2.5 kilometres compared to the 9-kilometre strike length of Colomac Main. Goldcrest was last drilled in 2017 and several key areas remain unexplored as illustrated by the high-grade intercept in hole C19-05. This hole was drilled within a previously untested section of the sill tracing strong continuity of mineralization to depth. We continue to encounter robust mineralization throughout the Colomac area sills, which reinforces our belief that with continued exploration, new discoveries and ongoing expansion of known zones will follow.”

All holes intersected gold mineralization over a strike length of 400 metres within Goldcrest South (Figure 1). Most of the holes were drilled steeply in order to explore the sill below previous drilling and encountered new mineralization intersected over significant downhole lengths. Values typical of Colomac Main-type high-grade zones were encountered in hole C19-05 with the latest holes extending mineralization to new depths. Large portions of the sill remain unexplored to depth as well as along strike to the south, within the northern portion of Goldcrest (“Goldcrest North“), and within the 800-metre section that separates Goldcrest South and Goldcrest North (Figure 1).

The FULL ASSAY TABLE and corresponding discussion is available as a media document within this release as well as on the Company’s website at https://www.nighthawkgold.com/news

Goldcrest is a 2.5-kilometre-long mineralized differentiated igneous intrusion that lies parallel to Colomac Main located 400 metres to the east. The sills are believed to be co-magmatic and have intruded a package of dominantly mafic volcanic rocks that were subsequently folded upright such that stratigraphic tops are now facing east. Gold mineralization is largely restricted within the more silica-rich upper portions of the sills, an area that is a primary exploration focus for the Company. The Goldcrest deposit is currently composed of two main regions of mineralization: Goldcrest South and Goldcrest North (Figure 1). The much smaller Goldcrest North is located 800 metres northwest of Goldcrest South and may possibly represent a detached portion of the sill. The area separating the two regions has never been drilled. 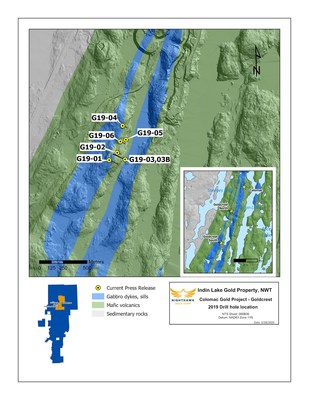 Technical Information
Nighthawk has implemented a quality-control program to comply with best practices in the sampling and analysis of drill core.  Drill core samples were transported in security-sealed bags for analyses at ALS Global Assay Laboratory in Vancouver, BC (“ALS Global”). ALS Global is an ISO/IEC 17025 accredited laboratory. Pulp and metallics assaying for gold was conducted on the entire pulverized sample. 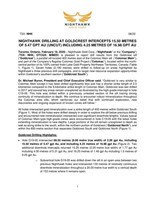