In 2017 the Company drilled two holes into the central portion of the deposit to undercut historical higher-grade intervals and intersected 12.60 metres of 4.96 grams per tonne gold (“gpt” “Au”), including 8.00 metres of 7.32 gpt Au, and 4.00 metres of 13.40 gpt Au (see press release dated January 17, 2018), giving credibility to the deposit’s potential and laying the ground work for the 2018 campaign which has focused on expansion potential to depth and along strike beyond known historical shallow intersections.

Drilling continues to intersect broad zones of mineralization open along strike and to depth with internal higher-grade intervals:

Dr. Michael Byron, President and CEO commented, “Drilling to-date has largely focused on the Colomac Main sill which contains the majority of the ounces in the current resource estimate. The smaller and lessor known Grizzly Bear accounts for about 1% of the total contained ounces; however, its historical higher-grade gold intercepts remain unexplored, and given its shallow nature and proximity to the Colomac Main sill, we consider it as a promising candidate for resource expansion. Grizzly Bear is not a silicified competent sill like the Colomac Main and Goldcrest sills, but being a brittle host, it has the capacity to house higher-grade mineralization. Initial drilling has confirmed this, raising the possibility that a high-grade gold system may be present. We look forward to the continued exploration of its untapped potential.”

Lengths are reported as core lengths. True widths vary depending on drillhole dip; most holes are laid out to intersect the mineralized zone close to perpendicular therefore true widths are approximately 60% to 80% of core lengths.

Grizzly Bear Deposit
Grizzly Bear is located 4 kilometres south-southwest of Colomac high-grade Zone 1.5, and 600 metres south of the Colomac airstrip within a few hundred metres of the former mine road network.  Eleven holes totalling 2,367 metres were recently completed to explore the deposit along strike and to depth (Figure 1). All holes intersected mineralization. Prior to 2017, Nighthawk had not drilled the deposit, however historical drill results were reported as part of the Company’s 2018 mineral resource estimate accounting for 807,000 tonnes at 1.04 gpt Au for 27,000 ounces (see press release dated June 13, 2018).

The deposit is underlain by mafic metavolcanic and metasedimentary rocks containing a felsic lapilli tuffaceous horizon. Its mineralized zone is subparallel to the strata, trending northeast, and is characterized by anomalous hydrothermal alteration, sulphide mineralization and gold. Mineralization consists of quartz-veins and veinlets with disseminated sulphides and native gold over widths of up to 15 metres. Historical drilling defined the mineralization in both the mafic volcanic and felsic horizon over a strike of 1,000 metres, a vertical depth of 100 metres, and widths ranging from 24 to 61 metres. Visible gold was commonly noted, with the best historical assays reporting 9.0 gpt Au over 6.06 metres, 6.96 gpt Au over 4.87 metres, and 2.60 gpt Au over 16.76 metres.

2018 Grizzly Bear Drill Program
Drillholes were laid out over a 200-metre-long section of the deposit’s strongest mineralization as defined by historical drill results. Holes GB18-02 and GB18-02B were collared 50 metres southwest of GB17-01 and GB17-01B, the two holes Nighthawk drilled in 2017 targeting the central portion of the deposit to follow up on historical near surface mineralization and explore further to depth.  Both the 2017 holes intersected mineralization tracking it to almost 100 metres below surface (see press release dated January 17, 2018). Hole GB18-02 intersected 6.25 metres of 4.04 gpt Au, including 2.50 metres of 7.78 gpt Au, and 1.50 metres of 9.06 gpt Au; while hole GB18-02B intersected 17.25 metres of 2.00 gpt Au, including 4.50 metres of 5.13 gpt Au, showing continuity of the zone’s shallow mineralization to the southwest and up to 70 metres below surface and remains open (Figure 2).

Hole GB18-01 was drilled to test the southwest extension of the deposit 50 metres from GB18-02 (Figure 1), and encountered minimal mineralization, as did holes GB18-04 and GB18-04B which explored the deposit 50 metres northeast of GB18-03. Holes GB18-06 and GB18-06B were collared 360 metres northeast of GB17-01 targeting an area of mineralization defined by historical drilling. Both holes returned anomalous values but not of the level in terms of width and grade as the holes to the southwest.

Drilling to-date at Grizzly Bear has confirmed the presence of broad zones of shallow mineralization with internal higher-grade intervals. Within the central portion of the deposit continuity of mineralization has been tracked to new depths, but at this early exploration stage, it still remains poorly defined and open in all dimensions. Grizzly Bear is a good example of Colomac’s exploration upside where one of its near surface deposits remains largely untested.

Exploration activities are currently ongoing at Colomac and throughout Nighthawk’s Indin Lake Gold Property as the Company continues to aggressively advance its objective of growing the Colomac resource and of generating and advancing regional prospects to augment Colomac, while unlocking the potential of this vastly underexplored gold camp. The Company recently announced completion of a flow-through private placement financing that has enabled the expansion of its drill program from 25,000 metres to upwards of 30,000 metres (see press release dated July 11, 2018). 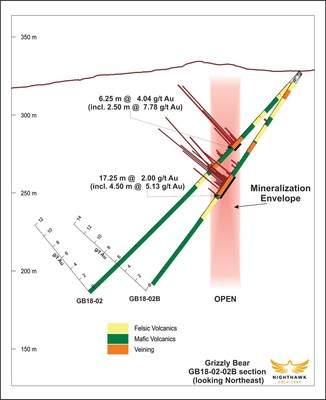 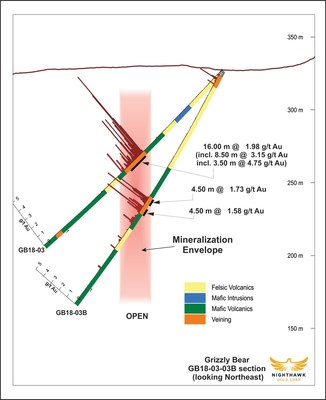 Nighthawk has implemented a quality-control program to comply with best practices in the sampling and analysis of drill core.  Drill core samples were transported in security-sealed bags for analyses at ALS Chemex Assay Laboratory in Vancouver, BC (“ALS Chemex”).  ALS Chemex is an ISO 9001:2000 certified laboratory. Pulp and metallics assaying for gold was conducted on the entire pulverized sample.

This news release contains “forward-looking information” within the meaning of applicable Canadian securities legislation. Forward-looking information includes, but is not limited to, information with respect to the Company’s exploration plans and its drilling program, including the ability to add tonnes and ounces to the Colomac Gold Project, and the timing and results thereof. Generally, forward-looking information can be identified by the use of forward-looking terminology such as “plans”, “expects”, or “does not expect”, “is expected”, “budget”, “scheduled”, “estimates”, “forecasts”, “intends”, “anticipates”, or “does not anticipate”, or “believes” or variations of such words and phrases or state that certain actions, events or results “may”, “could”, “would”, “might”, or “will be taken”, “occur”, or “be achieved”.