“Standard metallurgical testing on four Colomac 2019 samples is almost complete. Additional heap leach testwork is also underway, which will then give us a total of ten bottle roll and nine column leach tests and will shed considerable insight into the ongoing assessment of the deposit’s heap leach and primary processing potential.”

The 2018 campaign broadened sampling (21 boreholes covering seven (7) mineralized zones within the Colomac Main and Goldcrest sills), to other areas of the deposit including Zones 1.0, 2.0-2.5, 3.0-3.5 and Goldcrest North (Table 1, Figure 1). The testwork program was identical to previous campaigns, with each sample consisting of approximately 70 kg of drill core material collected from the respective zones. As in the previous studies, samples were assayed for gold and tested for grindability using the SAGDesign methodology, and for amenability to several gold recovery processes (see press release dated March 19, 2019). For illustrative purposes, a comparison of the latest heap leach test results to previously reported 2017 metallurgical testing is presented in Table 3.

Calculated head grades from the various tests show that Colomac material has a pronounced nugget effect in most samples studied to-date. Fire assay results are consistently low while metallic assays and screen analysis assays of all the size fractions gives a much better indication of the amount of gold present. This is confirmed given the extent to which gold is recovered in the tests completed (Table 1). As expected for material with gold nuggets, the calculated heads for various tests are erratic.

Heap Leach Testwork
The first heap leach test conducted was a bottle roll leach test on a composite sample of Colomac Main sill lower-grade material from the initial 2016 sampling program. It returned a highly favourable gold recovery of 81.8%, prompting additional heap leach testing to ascertain the opportunity for the use of heap leach recovery methods at Colomac. To date, four bottle rolls and five column leach tests have now been completed on minus half (½) inch crushed material.

An initial single high-grade sample (from the 2017 sampling program) reported a column leach test recovery of 34.3% after leaching for 107 days (see press release dated May 22, 2018). Considering the additional results now available, it appears that the previous low result, being the first column test done by the Company may have had insufficient cyanide added to the column test, which due to its high-grade nature, probably had more cyanicides (a substance that attacks or destroys the cyanide salt being used to dissolve precious metals) in it than the lower-grade samples.

Gold recoveries from the 2018 column leaching (107 days), when compared with the bottle roll tests, were significantly higher for Zone 1.0 and Goldcrest North but showed similar gold recoveries for Zones 2.0-2.5 and Zones 3.0-3.5 (Table 3). Therefore, the bottle roll tests seem to give a rough indication of the recovery that can be achieved but not the cyanide consumption (which is high due to the high agitation levels used).

Results from the current study, as well as studies completed on 2017 sampling are summarized in the tables below and show that the materials tested respond favourably to the proposed process options.

Preliminary testwork indicates that the Colomac deposit is amenable to all standard recovery technologies. Future studies will be broadened to include samples from other satellite gold zones and other zones to depth within the mineralized sills. Future work will also continue scrutinizing the heap leach potential of the Colomac deposit. The main objective is to confirm that the metallurgical responses observed so far will apply over a broader range of head grades, zone locations, and depths within the deposit. 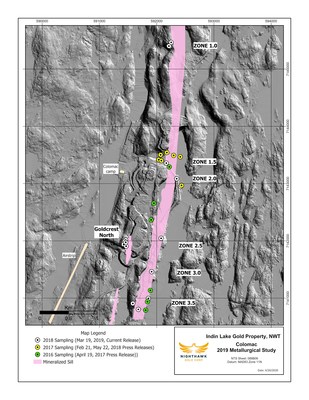 The technical information disclosed herein was prepared under the supervision of Dr. Alice Shi of Bureau Veritas and Mr. John Starkey of Starkey & Associates Inc., who is considered an independent “Qualified Person” as defined by NI 43-101 for the metallurgical testing performed on behalf of Nighthawk Gold Corp. Mr. Starkey has supervised the metallurgical work reported on and has reviewed and approved the technical disclosure contained in this news release with respect to such work.

Dr. Michael J. Byron, Ph.D., P.Geo., President & Chief Executive Officer of Nighthawk, who is the “Qualified Person” as defined by NI 43-101 for this project, has reviewed and approved of the technical disclosure contained in this news release. Please refer to NI 43-101 technical report “Technical Report and mineral resource estimate update on the Colomac Project of the Indin Lake Property”, dated June 13, 2018, as filed under the company’s profile on www.sedar.com

The Toronto Stock Exchange has neither reviewed nor accepts responsibility for the adequacy or accuracy of this news release.